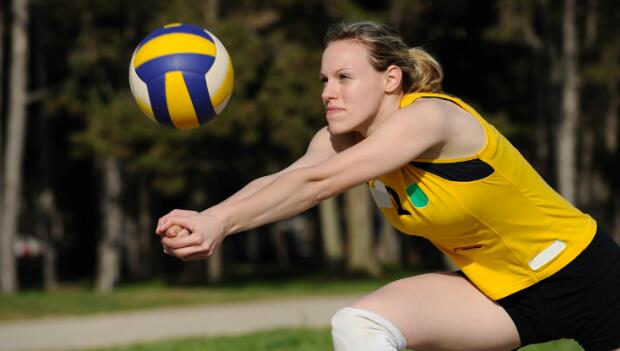 One of the biggest determining factors to the success of your practice is your warm-up. It is very easy as a coach to slip into a routine of running and stretching before every practice. But is this practical for a warm-up?

Here are five warm-up games perfect for getting your squad ready to play their best.

Note: Please do not avoid stretching as a result of this article, but let's see if there might be better ways of getting your players' blood pumping, as well as doing activities that better transfer to volleyball.

Running can be boring for players, so rather than getting their blood-pumping running laps, I have them play several different games to get their joints and muscles warmed up.

I have my players start off with warm-up games to get them going. We typically stretch right after the games. However, while the players are having a good time in the game, they are really getting a great workout, too. Here are some of the games I like to use.

Knee Tag is a simple drill that quickly gets your players sweating and working their legs hard.

Have everyone partner up and assume a defensive-ready position. When you say go, the goal of each player is to touch their opponent's knee as many times as they can. It is pretty simple but you will quickly see that those players that have a high ready position are extremely vulnerable to having their knees touched.

As they get better, they will learn to move quickly to avoid knee touches and the real smart players will use their arms to deflect their opponents attempts and counter with their own. I usually have them rotate every 30 seconds so they have a new partner. Once in a while, I'll have them keep score and have a mini-tournament.

Freeze Tag is one of my favorites to do once my guys and girls have learned to dive properly.

Pretty simple: Set up a defined playing area for your team. Half a volleyball court works well for 10 people. One person is "it" and their goal is to "freeze" everyone by tagging them. If the person who is "it" successfully freezes everyone, they win.

The catch is that anyone not frozen, may "un-freeze" a player by simply diving through the legs of a person who is frozen.

Anyone who is still tentative when hitting the floor will surely be tagged when trying to unfreeze someone. Winning the game is usually difficult for the person who is "it" and sometimes, I'll have two people be "it" depending on the numbers and how smart my team is at unfreezing people.

Pay attention to how tough it might be for one person to win and adjust the game. The person who trying to tag everyone will get tired really quick!

There are many forms of this game but I'll go over the two we most commonly use as a warm-up. Basic Dodgeball is a game everyone learned in PE growing up. There is usually 1-2 balls and it is every person for themselves.

Make sure your playing area is closed off with walls so that the balls do not stray too far. The goal is to avoid being hit by a ball three times. Once you are hit three times, you step out of the game and watch. A legal hit is anything below the neck (if someone ducks into a headshot, that counts).

If the ball hits a wall or the floor before hitting you, it does not count. However, if you catch someone's attempt to hit you, then that counts as a hit against them!

Players have to scramble to avoid being hit while still be aggressive enough to secure the loose balls. The winner is the last person not to be hit three times. Dodgeball is great for developing anticipation skills, arm-speed, and quickness.

This is definitely a favorite of all my teams. You will need a large area that is similar in dimensions to a basketball court. The centerline will divide two teams that you will need to set up.

The goal of the game is to knock out all of your opponents from the play-area while making sure you still have people alive in your own play area. The rules for being knocked out are the same as the normal game of Dodgeball (see above). With Greek Dodgeball though, when you are hit or your throw is caught, you go to a "jail" at the opposite end of the court, behind the other team's playing area. When over there, you can try to hit the opponent's team by having balls passed to you by players who are out of "jail."

If you do manage to hit a player from the other team while you are in jail, you can run back to your team's playing area. Teamwork is important because you need to knock your opponents out to win, but also need to ensure you get people out of jail by throwing them balls as well.

I learned this game for the first time this year when one of my players showed it to the team. It is pretty simple and can be played in a pretty small area (1/2 a volleyball is good for 10 people). One person is "it" and everyone else tries not to become "it" by being tagged. Stepping outside the boundaries makes you automatically "it".

The catch is that there is one volleyball in the game and the person holding it cannot be tagged. The team has to work together to try to pass the ball to teammates that are close to being tagged to prevent the person chasing from successfully tagging anyone. This is a great way to develop anticipation and quick-thinking skills. My current team really enjoys this game.