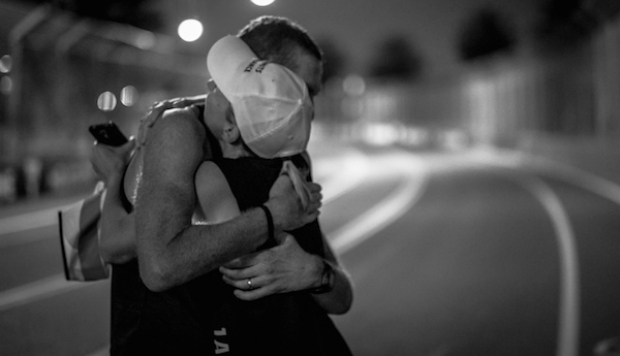 As Canberra wrapped-up at around 2am, the team had before them a four-hour drive to reach Sydney in time for number six. The true savagery of the situation meant Craig had an interrupted half-hour of sleep -- at best!

The discussions that took place on the lonely road to Sydney surrounding the efficacy of completing all 8 IRONMANs have since become taboo. The best answer I could get was, "oh, well, you know, a few unmentionables ..." followed by a swift change of subject. I suspect the wall had been reached, and the way around it was unknown. Craig described that time as, "ground zero."

If walking into the Canberra pool was "all doom and gloom," then Sydney was doom and BOOM! Craig was destroyed, smashed, flattened, gone. Whatever it was that would get him in the water this time, Omnipotence itself only knew.

But this was a journey of sanctity. Eight leaps of faith, each with immeasurable rewards. But he had to leap.

When the body of Craig Percival entered the pool complex, it was met by none other than John MacLean and Craig "Crowie" Alexander. Both the man who initially inspired Percival and the three-time Hawaii IRONMAN Triathlon World Champion were in simple awe of what Craig was enduring. The mind of Craig Percival reintegrated with his body, and number six was on.

Getting through that swim was miracle number one. Craig credits Alexander as being largely responsible, especially as he forced him to eat and drink. "When a three-time World IRONMAN Champion talks, you listen!"

Percival went from the pool to the massage table. "I can't recall a lot about the massage ... other than it was way overdue and I really wasn't sure how I was going to get on the bike," said Craig. The wall that stood before him was massive, and the situation seemed hopeless.

What happened next was nothing short of a classical deus ex machina. Three hot IRONMANs in Darwin, Perth and Adelaide preceded two more under extreme fatigue in Hobart and Canberra. Sensing Craig's feelings of hopelessness, John MacLean wheeled himself to within a few meters of the prone Percival.

"This moment could perhaps be the defining moment of 8in8in8," described Craig. It was the sight of John MacLean wheeling himself backwards up a hill during the 1995 Hawaii IRONMAN en route to becoming the first wheelchair athlete to complete the great race, that prompted the, "if he can do it, I can do it" inspiration for Craig to pursue IRONMAN in the first place.

"... on this day," continued Craig in reference to this March 11th, almost 21 years later, "I'd watched John park his wheels and walk over to me and kneel down. Bloody amazing!" John spoke to Craig about pain and suffering, and how opting-out after five in five was understandable. Hell, over $40,000 had been raised for the JMF! John used a well-known adage, looking Craig directly in the eye, "pain is temporary but memories last forever." If he got on that bike and just took it 5km at a time, who knows what would happen.

"It sounds and is so simple, yet at that point in time, hearing it from John was exactly what I needed."

The marathon took place in the same manner, and after 40km, Craig was joined by John and many others who walked the final two kilometers with him to cross another finish line.

After a few hours of sleep at a Sydney airport hotel, Craig flew north to Brisbane, Queensland fueled by the penultimate fumes of number seven.

More incredible names and faces greeted Craig at the pool, and he completed another quality 3.8 as the JMF total made it to $52,200. The ride drew more adoring disciples, including Olympian triathlete, Maxine Seear, and the winner of the inaugural Ultraman Australia, Dave Kalinowski. Wheelchair triathlete, Sara-Ashlee Tait, in training for the World Champs, drove from the Gold Coast with her dad to hand-cycle and push her race chair with Craig into the night. And Even the great Mark Allan (the six-time Hawaii champ) was moved to message Craig; "You can make it for sure!!!!" said The Grip.

The difficulty of IRONMAN Marathon number 7 was compounded by knee pain that essentially resulted in a 42.2km walk, a 5:15am finish, and a surreal pseudo-spiritual experience that had him watching himself. Perhaps a survival mechanism, but definitely an indication of just how physically difficult 8in8in8 was. This may explain accounts from some supporters who say he was like a robot obeying simple commands. He may even have been asleep, but once again, he was far from alone.

From 5:15am on Sunday morning in Brisbane, to midday at the Prahran Pool in Melbourne, Victoria some 1300km south, Craig underwent an amazing transformation. The walking zombie was now as present as ever. Seven down, one to go was enough information to allow Craig's mind to open-up to the adulation he received from the sizable crowd. After interviews and speeches, Craig entered the pool to a jubilant countdown, and the final act of 8in8in8 commenced at 12:40pm.

I found myself in the back of a supplies-laden support vehicle during the ride with two awesome endurance athletes; a triple-figures ultra-runner, and an Ultraman triathlete. Both women as tough as they come, and both stupefied by what they had just witnessed. This was a typical occurrence -- incredible athletes, dumbfounded and speechless! I was the same.

The rest of the final IRONMAN was a celebration of a remarkable achievement. The ride was a beautiful journey by the ocean, comprising a healthy pack, Craig always at the front. At the 70km mark, Dr Mitch Anderson, former pro with an 11th place in Hawaii, and an IRONMAN best of 8:12 to his name, helped celebrations along by injecting Craig's nastier foot with the anesthetic, Lignocaine. The sight of his toes (he ended-up losing seven toenails!) and the ring-block method of administration was too much for some, but he needed it to see him through another 110km on the bike, and his final Marathon.

The scene for the Marathon was the Albert Park Formula 1 track. It was free from traffic, and open for anyone to run with Craig in one of the most unique atmospheres imaginable. The overwhelming feeling for Percival was a far cry from days earlier. After all the distance, travel, pain, sleep deprivation, and time away from his kids, he didn't want it to end. "... It's been a massive part of (our) lives ... for the last 18 months," he said, "and Melbourne was an amazing day."

It wasn't that he suddenly became invigorated with speed, more so he was able to enjoy the pedestrian pace for what it was -- a time to take it all in and to do what he now knew he could do without urgency.

At 4:30am, leading another group of stayers, he approached the finish line flanked by Lindell and kids. With both hands raised, he pumped his fists toward the heavens, and crossed the line to complete his eighth IRONMAN triathlon in eight days, covering each of Australia's eight states and territories.

There were many moments of sheer magic over the eight days. Everyone involved has their own defining moment. For Craig, witnessing a former paraplegic rise from his chair to ignite his flickering flame was up there; many, caught in a unique moment, extended themselves beyond imagination; Scott Lampshire felt compelled to drive from Adelaide to Melbourne to again go the distance with Craig, as did Tasmanian Ultraman, Peter Wheatley. But what I saw at the Prahran Pool on the final day said it all for me.

Organized by the JMF, was a presentation to be made by Craig of a grant for $8945 to Tommy, a gorgeous two-year-old boy with cerebral palsy and severe vision impairment. His grant will afford him his first specialized wheelchair. Without the grant, his family simply couldn't afford it. Witnessing the love with which Tommy was held in his parents' arms, knowing their little boy was to receive something so profoundly life-altering was my moment. All because a great man gave every last drop of his own talents to ensure others have a chance at realizing their own.