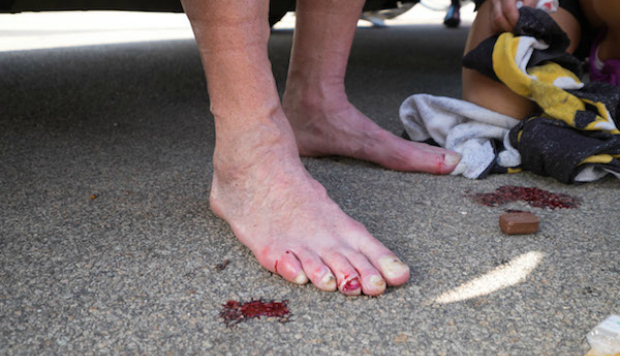 At the 41.7km mark as the clock hit 12:30am, Craig stopped us just out of view of support crew, family and other amazed friends. The purpose was to thank us all for helping him through what was a brutally tough night.

For me, it was an amazing, almost divine experience. For Sebastian and James, who ran 14km and 18km respectively, a new hero had appeared before them in the light of the midnight moon, and 'Doc', who had intended to run an evening 5k, ended up with a marathon to his name.

All of us were one beast, an existing organism that survived, even thrived, on a mutual exchange of energies. The product of his struggle was absorbed by the group and converted into usable energy for the punch-drunk IRONMAN. It was a giant mitochondria running around Sandy Bay that night, and similar entities morphed with Percival on every one of the 24 legs that made up his eight IRONMAN triathlons.

The half-way point had been reached, but at what cost?

A Melbourne breakfast radio-show phone-interview a few hours later while at Hobart Airport highlighted just how tired he was. He sounded down and out. When asked what was hurting the most, Craig replied without hesitation, "my toes." By now, he had started antibiotic medication to stave-off infection. Speaking retrospectively with the same show, he elaborated. "My feet were banged. When I saw the look on my wife's face ... she kind of peeled my shoes and socks off, and it wasn't real pretty. And I guess it was just that realization."

That night, a message arrived from Dave Orlowski, one of the 11 finishers of the original Hawaii IRONMAN of 1978. He finished his massage by saying to Craig, "Look for strength in your Passion to overcome weakness."

In Australia's Capital, Canberra, it was "all doom and gloom" as he approached the pool. But as the doors opened, and he prepared himself to once again walk on stage, he was met by Robby Johnstone. With the help of a wheelchair, Robby was rehabilitating. A promising medical sciences student three years earlier, Robbie was hit by a car while on a pedestrian crossing. He was at the pool to swim with Craig. Robbie could not walk into the complex as Percival had, but he could swim, and it was something they could do together. Here was the strength in his Passion! "That was a massive boost for me," said Percival, "and really was what I needed."

Craig suited-up to log another 76 laps of the 50-meter pool. 10 minutes after he had started, Robby splashed-in, and for every meter of the 500 they swam together (Robbie kicked the whole distance on his back), Robby cheered Craig on; "Go Craig, Go Craig!" The significance of Robbie's involvement in 8in8in8 cannot be underestimated. "This moment will stay with me forever ... You'll never know how much this helped me," stated Percival seven days later.

The ride again was tough. In the words of Lindell, it "... tore him apart." Understandably then, as he reached transition, the amazing reception he received was a Godsend. Meeting him was once again Robbie and his family. Over a dozen Canberra Sanitarium Weet-Bix Kids TRYathlon participants, five of whom had a disability, also met their hero. There was Emily Tapp, second place finisher at the ITU World Paratriathlon Championships, and South Africa's Sydney 2000 Olympic triathlon representative, Megan Hall.

During the night, a young lad named Talon extended himself beyond his own limits to run 11.8km with Percival, and even more phenomenal was his brother, Shae, who ran a kilometer to demonstrate his cerebral palsy need not hold him back.

To say the marathon hurt would be an understatement. Lindell posted her impressions of the day on Facebook; "4am. I have just watched my husband do five IRONMANs in five days. Kate (8in8in8 project manager) and I are sitting in a Tarago driving Craig from Canberra to Sydney. I believe today was one of the toughest days of my life. Yesterday's IRONMAN took Craig to a place I haven't seen, ever. I was so upset seeing Craig go to sleep in so much pain."