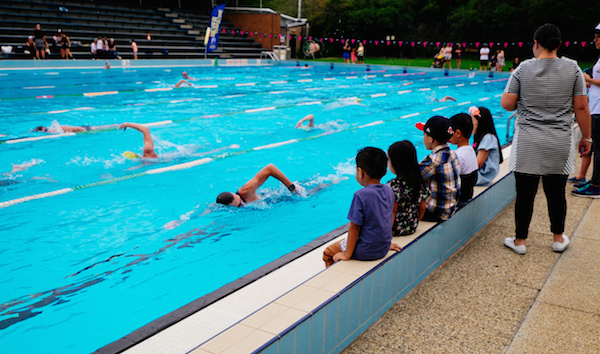 Adelaide was next, and early-March temperatures in South Australia ran true to form -- hot! Another strong swim of 57:40 preceded the ride. Throughout the swim, Craig was joined by, among others, Scott Lampshire. As the day continued, so did Scott. At the end of the 180km, he was still there, right alongside Percival changing into running attire with no signs of stopping.

Somewhat against team orders owing to the previous two IRONMAN efforts, and mid-30 degree temperatures, Craig (and Scott, who stuck by a truly grateful Craig Percival) posted another sub-12-hour effort. There was little doubt that the third high-temperature IRONMAN in a row had reaped a physical toll.

But there was an element of relief. Craig's worries about tight turnarounds coming off Perth had been put to rest, and he believed the first three would be the harder events. He also believed there was respite in the form of cooler temperatures in his southern island home-town in Tasmania, and the difficulty of both what he had done and of what lay ahead would be tempered by familiarity.

Another quality swim in Hobart masked his fatigue, and he proceeded to don his one-piece Jaggad tri-suit that bore "#4" and "TAS" on either side of the back panel. Three corresponding suits had been laid to rest, and four more lay in waiting. Behind closed doors though, signs of fatigue and wear were becoming outwardly evident. Inwardly, Craig was under no illusions that this thing was taking him by surprise.

After a short shower, a sterile needle was held over a blue flame. It was used to puncture blisters around and under his large toenails. A fine fountain of fluid raced out under the pressure of 126 kilometers of wet shoes that softened and incessantly rubbed on his distal phalanges. A hefty dose of pawpaw ointment was applied to cover his fraying toes, and fresh socks hid the obvious discomfort before he mounted the bike. This too would become a frequent ritual.

Damn your unpredictability, Hobart! Out on the bike, the day turned out not only hot, but the wind whipped-up, gusting to 54kph. In trying to minimize energy expenditure, the team decided to seek more shelter. It worked to a degree, but sometimes there's no place to hide. News of JMF donations reaching $31,600 increased Craig's inexorable forward motion.

More damage had just been inflicted upon his already fatigued and, let's face-it, fried vitality. A significantly slower average speed added-up to a longer, tougher day in the saddle. The last thing Percival needed now was to run a marathon, but there was no choice.

Now, as the hour passed 11pm, the loyal band of runners that included a top-40 World's Toughest Mudder participant, an Australian Commonwealth Games middle-distance representative, an 11 year-old named Sebastian, a 12 year-old named James, a guy they called 'Doc', several others, and me, circled the park time and again. A focussed stare that fell just short of vacant adorned Craig Percival's face, and he was clearly suffering.

He continued to fuel his protesting body, orchestrated through a seemingly psychic connection with Lindell. I witnessed it several times -- whatever Lindell saw in his glazed-over eyes communicated everything he was feeling and everything he needed in a single moment. A lap later he collected his vitals, and the magic rolled on into the night.