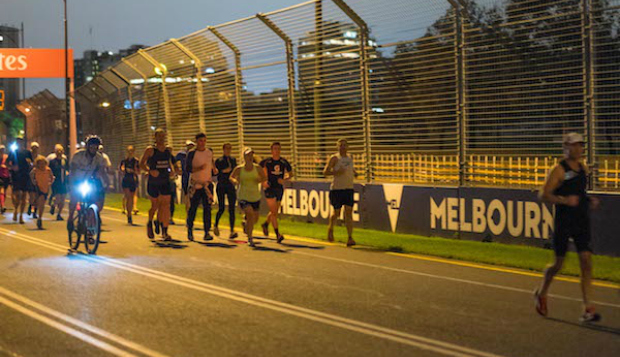 Uncle Steve had some understanding of the physical commitment involved, as it was he who Craig joined at his first triathlon at age 15. But for other family members, they could only know it was for a good cause. Mum, Janne, was pacing the pool deck with that unique mix of pride and concern that only a mother could know. Anxiety-laced tears of petrified joy were shed as she explained her tumultuous innermost feelings. "As a mother, it worries me sick what he's doing to his body. Every night I lie awake with worry, and I think 'thank God, that's another one done.'"

But all of them, family and friends, had seen the immediate impact, even before the beginning of day 1 in Darwin, Northern Territory. The day before, Craig had presented two cheques of $10,000 from the John Maclean Foundation to two beautiful kids, Samuel and Tatiana, whose lives had changed immeasurably for the better. There was no doubting the faith held in this man's abilities.

It was 2am when Craig hit the water in Darwin, a deliberate ploy to beat the expected 34-degrees of oppressive heat and humidity typical of the continents' northern climes. By 2:55am, he was transitioning to the ride. He was already a little ahead of schedule, and a sub-hour swim was well within the capabilities of this vastly experienced IRONMAN and Ultraman athlete.

The ride also passed without drama. In fact, it went a lot better than expected. Riding draft-free -- a stipulation to which he determined to adhere -- Percival showed his strength on the bike and the courage of his own convictions to put his head down and get the job done. Casting a picture of perfect aerodynamic fit onboard his Giant Trinity Advanced SL, he rode 5 hours, 17 minutes, averaging 34 km/h! Craig's IRONMAN experience told him that the corresponding effort was perfectly reasonable -- not easy, but it felt good.

The marathon didn't feel quite as good. But, it was an IRONMAN Marathon run in extremely hot conditions. In his own words, it was "insanely hot," and you do what you can do. It was made easier by the support he received, and especially by the appearance of Samuel and family, who came to offer their gratitude in the best way Craig could ever hope for during the final kilometers of the Marathon. The total time for day 1 was 11 hours, 26 minutes.

How things would play-out in the days to come remained an unknown quantity, but knowing his efforts channelled their way into helping Samuel was priceless. "It doesn't get much better than that," Percival said on the Darwin news that night. Though he would have done all eight IRONMANs for that single moment, he could not possibly have anticipated the days ahead would hold even the greatest in the sport in total awe at the depths to which Craig Percival would commit.

With no time to waste, he and Lindell headed for the airport, bound for Perth, Western Australia, and the 5am start to IRONMAN number two.

It went even better. The swim at the Melville Pool was completed in 54:30, spurred-on by supporters who sensed greatness in the air. His bike was expertly assembled -- a daily routine undertaken by some of the coolest bike-mechanic heads in the country -- and he was on the road again. The first two hours netted 66km and he wasn't slowing down despite the mercury rising to 30-plus. Craig's second IRONMAN ride clocked-in at 5:30.

He began the marathon with the temperature at 34 degrees. No wind, no cloud. He was again running tough, but steadily closing in on the airport where he would complete day 2, shower, and catch the last flight out of Perth for Adelaide.