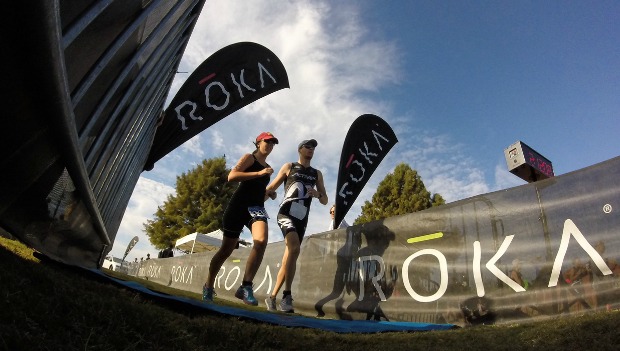 We've all seen "triathlon widows" sitting on the sideline of a race, homemade sign in hand, anticipating their partner's finish and hoping almost as much for a return to normalcy as for a PR.

Living with a triathlete when you aren't one can be a true test of companionship--but falling in love with a fellow multisport aficionado creates its own distinct minefield of obstacles.

If you and your partner are sporting the same hilarious bike short tan lines, each have a bag of swim crap in your car at all times and wake up at dawn to train at least twice a week--congratulations, you're a triathlete couple.

Now here's a guide to keep you from becoming that awkward triathlete ex-couple who avoids one another at local races.

1. Plan Your Race Schedule Together

There's nothing better than sitting down and plotting out your A races for the season. When you're part of a triathlete couple, however, you need to keep the lines of communication open during scheduling.

While it may seem really neat to do IRONMAN Texas together, the reality of both people training for and competing in such a big race on the same day--well, let's be honest here--it could implode in your face. Certain races might call for one of you to play the supporting role, while other races are purely for fun and are good opportunities to race together.

Just be honest about each of your race goals for the year, as well as your other commitments, and then plan accordingly.

My husband (a fellow triathlete) gave me his first (and I'm happy to admit last) Rudy speech during a half iron-distance triathlon several years ago. I'd had not one but two flats on the bike and was entering T2 a little worse for wear. Honestly, I was considering scrapping the run altogether.

His pep talk didn't rally me, it pissed me off--and I ended up running the worst half marathon of my life, most of it in tears. But that's me. Maybe you love being spoken to as if you were taking a knee in a high school locker room.

My point is, rallying a loved one during a tough race or a hard training session means knowing what they need in that moment. Is it a football speech, some humor or maybe just a kiss? Learn it, and only stray from that winning formula at your own peril.

3. Learn How to Be a Good Race Sherpa

First off, let me say that if your partner is a good race Sherpa you should marry them immediately and never look back. Many multisport couples, however, have a hard time stepping away from the starting line and slipping into Sherpa mode.

When it's your turn to carry 5,000 pounds of your partner's gear while walking aimlessly around a race venue for hours on end--suck it up and do it with love. Don't complain that you missed your long run that day, and God help you if you complain that you are tired after your partner finishes their race.

Race Sherpas don't go off the clock once the race is finished--it's a full-day shift that really starts the night before the race. Rub their feet, bring them snacks and do all of it with a smile, because the better job you do, the more they will be there for you when it's your turn to toe the line.