Evolve or Die: The Future of Bike Buying 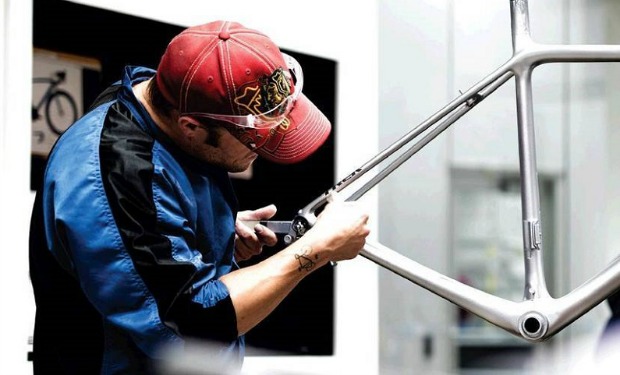 Last year, we all watched Jan Frodeno tie a beautiful bow on a remarkable, record-setting season by winning IRONMAN's European, 70.3 and World championships. With those wins, Frodeno became the first athlete to own a Kona title and an Olympic gold medal.

The bike Frodo rode to his Kona crown, the 2016 Canyon Speed-max CF SLX, is a study in efficiency. It's quick and clean, with integrated hydration, fueling and tool storage. Just days before the win, Canyon CMO Matthew Heitmann was part of an official media debut of the new Speedmax, and it received incredible attention. Then, Frodo rode it to his Kona crown. Suddenly, the Speedmax was the must-have tri bike.

"That was unbelievable," Heitmann said. "There's huge interest in triathlon in the world, and having the best triathlete as the world champion, on the bike we were debuting? It's huge for us. We couldn't have asked for anything better."

The upside? You can buy one—online no less—direct from Canyon. In fact, they don't sell the bikes in shops; you simply click and pay, and your bike shows up in a cardboard box at your door, cabled and ready to ride, save for a few basic installs.

Downside? If you live in America or Canada, unless you fly to Canyon headquarters in Koblenz, Germany, you can't get one. Yet. But your desired Trek Speed Concept? Oh yeah, you can buy one online—click, ship, ride—with just a smartphone and a credit card.

Mark 2016 as the year the bike-buying landscape made a seismic shift. For decades, you likely bought your new bike one way: with a trip to your local bike or tri shop. After a bit of finagling, you rolled out of there with your new ride. But the Internet has changed all that. In the last decade, we've gone from buying simple things online, like a set of tires, a pair of shoes or your LAVA Magazine subscription. Now, guns, cars, sex (in some states) and your Domino's pizza can all be acquired from the comfort of your own couch.

Now, after years of resistance from the industry's biggest brands, bikes are making their direct-to-you debut, with Trek—and soon, Canyon—changing the face of bike sales. Some welcome the change with open arms. Some traditional retailers, eyeing their already slim profit margins and skeptical about this tech wave, are stomping mad. Others are prepping their shops for the evolution. Either way, the online wave is splashing ashore in America.

On its face, the consumer-direct model is simple: an online transaction just as when you order your holiday gifts from J. Crew. Click, ship, wait for the knock at the door. It cuts out the middleman: the retailer. With no middleman to manage and engage the transaction, there's often no markup from an importer or retailer for the consumer to absorb. And for manufacturers, stock is managed directly; the order comes in, the product goes out—often to the cost benefit of the consumer. For web- and cost-savvy buyers, this is the prime reason to buy online—it's simply cheaper.

Yet for its ease, the consumer-direct model is fraught with complexity. With the debut of online bike sales from industry behemoth Trek last winter, and the impending debut of online-only Canyon Bicycles to North America, a longstanding bike sales model—your local shop—is at risk of losing your sale. Enough lost sales and they're at risk of becoming victims of the Internet age.

Remember Tower Records? Blockbuster Video? Your local cabbie? Enter iTunes, Netflix and Uber. Love it or hate it, the Internet takes the tactile pleasure of a newspaper you love to unfold in the morning, and replaces it with the cold, hard tap of an iPad. It's easier. But in the case of all our accoutrements as triathletes, be they tri kits, running shoes, wetsuits or bikes, is it better?

Within triathlon, Xterra Wetsuits has proven it's a tenable model in the wetsuit segment. It sells through zero retailers, with consumers buying wetsuits, Lava pants and inflatable paddleboards direct. Shipping is easy. And unlike with bikes, there's no build, adjustment and maintenance; just pull it on and go. It's to the ire of the rest of the wetsuit market, which, like the bike market, sells through traditional retail channels. But with no middleman, Xterra is laughing all the way to the bank.

If bikes direct becomes de rigueur in America, all credit will go to Trek. Born in 1976, Trek went from early silver-brazed alloy frames to beautiful carbon fiber offerings, built wholly in their factory in Waterloo, Wisconsin. The company was bolstered in the 1990s and early 2000s by Lance Armstrong's seven Tour de France wins and continues today as a leading brand in engineering and composites.

Last summer, Trek stunned the bike industry when it announced a new program called Trek Connect. In September Trek became the first American brand to sell direct. However, the company supported that endeavor by having bikes ordered online shipped to existing Trek retailers or their own Trek Superstores. There, shop staff build and deliver the bikes.

"The writing was on the wall for a while, and a pure play wasn't a sustainable model," Trek brand communications director Eric Bjorling says. "We had three options, and option one was to ignore the Internet and that didn't seem viable. Option two was to focus on digital and say, 'Good luck, retail,' but we built our brand on IBD [independent bike dealers], and those are our partners and friends."

So they decided to serve both their e-commerce and brick-and-mortar interests. "The way consumers want to interact with a brand and the product is evolving," Bjorling said. "It's not easy being first here, but it's been a great thing for our retailers."

While the gut reaction from many Trek retailers was revolt, Trek's quick education was that the omni-channel system still supported them by providing the storefront with a cut of the online sale. Since then, the uproar for those retailers has generally subsided, with the message among retailers being: "This may well work."

"For us, online doesn't replace brick-and-mortar sales," Bjorling says. "Thus far, it's picking up a few purchase from retailers that didn't have that bike on their floor, or a non-traditional product, and triathlon bikes are very much that. Really, it's an external warehouse, if you will. That's how our retailers are thinking of it, and it's been a good thing."

Trek president John Burke is resolute. "This is a massive investment in the long-term success of our brand and our retailers," Burke says. "We believe the most successful companies in the future will all be omni-channel enabled and we are doing everything we can to make sure that future for our retailers is bright."

For years, cheaper online meant "cheap." For a while, that was the preferred sales model of Canyon founder Roman Arnold. After taking up the reins of his father's bike shop, Radsport Arnold, when his father died, Arnold decided to create and sell his own bike brand: Canyon. He did what many have done (and still do): opened an Asian open-mold catalogue, picked a frame and slapped a "Canyon" sticker on it. After a slew of recall issues, Arnold decided to invest in his own tooling and make bikes the way he wanted: strong, fast and safe. He hired PhD Michael Kaiser to study composites, hired more structural and aerodynamic engineers, and became a legitimate brand.

He then decided to eschew the standard practice of finding a distribution channel and a network of retailers, and instead sold his bikes online, direct to the consumer.

"There was this Internet thing, and Roman had what we Germans call 'Bauchgefühl' or gut instinct—an intuition," says Canyon CMO Matthew Heitmann. The early years of Canyon's online experiment were challenging to say the least. "Roman had a hard time overcoming negative press and sentiment, because everything sold online at the time was an inferior product."

His answer? Win mindshare by being better. The company hired a cadre of engineers and build their own test rigs, setting their standards higher than European product safety standards. "He said OK—I'll make bikes that test the best," Heitmann says. Soon, Canyon was the top-tested bike in Tour magazine's famed testing protocol. It thrust the brand from obscurity to the hottest bike on the German market, and online orders went through the roof. "The motivation for Roman and Michael was combating the negative perception and having a better reputation," Heitmann says, "but of equal importance, they wanted to build a safe product, so they could sleep at night."

Today, Canyon employs 40 people who are dedicated solely to R & D and engineering. The company was the first to initiate the use of a CT scanner to scan forks and include a QR code with a record of manufacture. "We like to say that Canyon is an engineering firm that builds bikes," Heitmann says.

The company, based in Koblenz along the banks of the Rhine River, is not only hot in Germany anymore. It recently opened sales into Australia and New Zealand, and with American fans clamoring, Canyon has its eye on bringing its road, mountain and tri bikes to the American market.

Canyon's direct-sales model allows them to warehouse thousands of bikes, shipping them worldwide from their headquarters in Koblenz, Germany.

Sometime soon (perhaps later this year, maybe early 2017) Canyon will plant its flag on American soil. And when that happens, the market will be truly disrupted. For while Trek's online component will have a generally similar retail pricing protocol to brick-and-mortar stores, Canyon will be direct to consumer quite literally: your bike arrives boxed at your front door. With no middleman in any sense, the cost savings goes largely to the consumer, to the tune of about 30 percent. Consumers on the fence between two brands will tilt toward the massive advantage Canyon will own: cost.

"It's hard to say, as every currency is different, but in general, if selling in US dollars, you'd be looking at least a 20 to 35 percent savings over like-type bikes," Heitmann says. When matching Canyon's Kona-winning Speedmax against Cervélo's P5, a Cannondale Slice or a Specialized Shiv, it may just come down to price. And at that point, direct sales becomes very attractive.

"We have a nightmare scenario right now: the demand is so high, we're just having trouble delivering," Heitmann says. "We're catching up, but consumers, they just rave; they say they're the best bikes and the cheapest. It's such a compelling story. I mean, to have one of the best bikes in the world for 30 percent less—why not? Additionally, we're winning all the races, demonstrating in triathlon and on the [Pro Cycling] World Tour that we have a superior product."

With that, Americans are clamoring.

"For our future plans, America is the most important market," Heitmann says. "We've taken the initial steps and would like to be there this year. But we build according to production runs, and we know the American consumer isn't going to be excited about that. So our plan is to have a really good quantity of bikes already manufactured, boxed and ready to go. We feel you're not a true global player until you're in the U.S. market."