Whether he could see or not, competing in triathlon of any length was a stretch for Somsan. Until 2014, he had never trained on a bicycle. He’d run and swam since childhood, although never competitively.

But if you want to be an Ironman, you’ve got to push yourself.

So Somsan, who lives in Gilbert, Ariz., got a tandem bike from the United States Association of Blind Athletes, an arm of the U.S. Olympic Committee that provides athletic opportunities to visually impaired persons, and enrolled in a week-long cycling camp at their headquarters in Colorado. He proved a quick study; just weeks after learning to ride the bike, Somsan completed a sprint triathlon. Then Olympic distance. Then a half Ironman. And then—less than a year after his first bike ride—a full Ironman.

Of course, no one can do this alone. According to U.S. Paralympics, there are 21 million physically disabled people in the United States, and only 10 percent participate in daily fitness activity. That’s usually because they lack access to the expensive technical equipment they need to integrate into sports.

“In a lot of ways, Michael can see so much better than I can," says Somsan's training partner, Dominic Bernardo.

Somsan is fortunate: He has nearly a dozen sponsors who help with everything from race wear to travel grants.

And, of course, he relies most on his sighted guide, without whom his race can’t even begin. 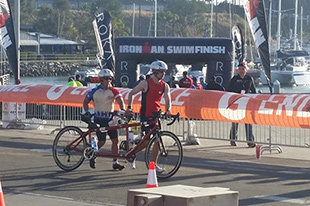 That’s Dominic Bernardo, a triathlete who thought his Ironman career was over after a 14:29:24 finish in the 2013 IRONMAN Arizona left him exhausted. “I told my wife that I’d never do another Ironman unless it was Kona, and I didn’t qualify for Kona,” he says. “So that was the end of my Ironman career.”

But Somsan inspires people to do all kinds of things, so this week, Bernardo crossed the finish line of another Ironman.

And, as he promised his wife, it was Kona.

But it wasn’t his Kona.

“It’s a unique opportunity for me to do Kona, but it’s Michael’s race,” Bernardo says. “I’m honored and privileged to be by his side and help him get through it.”

‘A part of something bigger than yourself.’

The pair met three years ago, when Somsan contacted Arizona Disabled Sports, an organization that coordinates athletic opportunities for people with disabilities and for which Bernardo’s sister works. Since ADS offers no triathlon programs, Bernardo agreed to talk with him.

“He wanted to train with me,” Bernardo says, “but I was physically and mentally fatigued and didn’t want to do it. But I served as a mentor and resource for him, and I promised him that if he finished an Ironman, I’d be there to place the medal around his neck.”

With Bernardo serving as counsel, Somsan found other training and race partners for the 2014 season, culminating with IRONMAN Arizona. A nasty cold front arrived on race morning, and athletes faced a chilling north wind that caused many to drop out. Not Somsan. He battled through and finished in 15:12:39, good for fifth place in his division. As promised, Bernardo was there to give him his medal.

A year later, Somsan won his division in 15:21:27, and Bernardo finally agreed to train with him. The pair traveled to California for the Oceanside 70.3 and finished in 7:45:31.

Then came unexpected news: Somsan would be one of five disabled athletes selected for Kona.