The Pros and Cons of a Big City Race 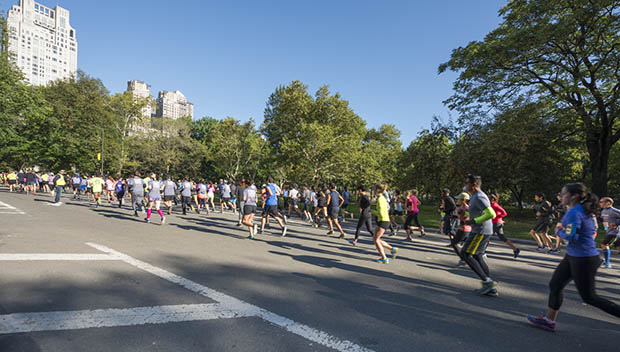 Boston. New York. London. Chicago. You'll be hard pressed to find a marathoner who doesn't have one of these races on his or her bucket list—and for good reason. Big city races are exciting. The pros are out in full force, and if you're lucky, you might be able to nab a PR. But there are downsides as well. If you have your eye on a big city race—whether it's a full or half marathon or a special race like the Peachtree Road Race—weigh the pros and cons before hitting the registration button.

Great Infrastructure. Whether it's hundreds of porta potties at the start, a USATF certified course or an organized corral system, big races have the details mastered. If you're looking for an event that runs like clockwork, one of the major races should be on your list.

Amazing crowd support. Anyone who's run the New York City Marathon will be able to recall the deafening roars of 1st Avenue (is there anything more chilling than hearing the crowd as you descend the Queensboro bridge?). And if you're familiar with the Boston marathon, you probably know about the energetic Wellesley College girls near the halfway mark. If you love the boost that crowds can give, there's nothing better than a big city race.

Pace support. Most big races have official pacers that can help you cross the finish line in your goal time. And even if you opt out of the pace groups, larger races should still have plenty of runners near you. Conversely, if you choose a smaller race, you may find yourself running solo for a chunk of the race. If you crave competition, that is something to consider.

Bragging rights. The big name races are ones that even non-runners know. Tell your boss you just finished the Chicago marathon, and we guarantee they'll be impressed.

The Price. Big marathons have tons of perks, but they can also cost tons of dollars. With more runners (and crowds), big races have to rely on local law enforcement to close roads and police the course. All of that costs money, leading to higher registration fees. You're also paying more for a brand name—most small to mid-sized marathons cost about $75 (half marathons, 10Ks and 5Ks are even less!). The New York and Boston marathons cost two to three times as much. Add in the higher cost of hotels and restaurants, and a big city race could take a major chunk out of your budget.

Registration is often via lottery (or in the case of Boston, time-based). If you're not ready to sign up for a race months in advance or you don't like the idea of entering a lottery, a smaller race might be more to your liking. The big city races really require you to commit to running—if your plans change or you get injured, you'll likely be out the cash.

Crowded courses. It can be nice to have company around mile 20, but constantly running elbow to elbow with other runners can get old after a while (we're looking at you New York City Marathon). And more congested roads may cause you to bob and weave through the crowds, leading to a longer distance on your GPS watch.

Logistical challenges at the start and finish. There's something nice about rolling out of bed and heading straight to the starting line, or finishing a race and immediately reuniting with your crew. The bigger races have their perks, but easy start and finish line logistics are usually not among them.

At the end of the day, it all depends on your race day priorities. Think about what you want your race day to look like, and register accordingly.

READ THIS NEXT: Why Atlanta Is the New Running Hotspot