Olympic Steeplechaser Emma Coburn is Optimistic About the Future 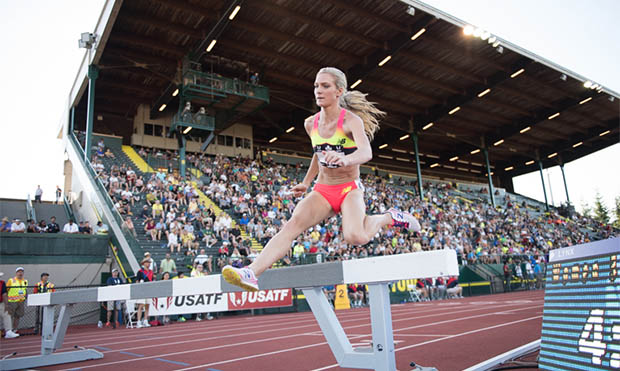 In July, 25-year-old Emma Coburn will head to the U.S. Olympic Track and Field Team Trials in hopes of earning one of three spots on the women's team for the 3000-meter steeplechase event.

The three-time and reigning USATF Outdoor Champion is working to repeat her 2012 showing at the trials, where she scored first place before heading into the Olympic Games in London. For now, finding balance while gearing up for the big days to come are at the top of Coburn's priority list.

Growing up in the small town of Crested Butte, Colorado, the University of Colorado graduate first started running under the influence of her older brother and sister.

"Like many younger siblings, I looked up to my brother and sister and wanted to do what they were doing, just to be with them," Coburn says. When her brother signed up to run the distance events for his track team in sixth grade, and then her sister followed suit, there was no doubt the third of four siblings would do the same when her time came.

Going to school in a tiny mountain town meant small class sizes and the opportunity to play every sport during its respective season.

"Track wasn't my favorite sport even though I ran it every year," she says. "It wasn't until halfway through high school that I truly became invested."

As fate would have it, the experienced 800-meter runner stumbled upon the steeplechase event while planning for an upcoming meet. Not wanting to make the lengthy drive to Albuquerque, New Mexico from Colorado to compete in a single event, Coburn's dad encouraged her to find another race to run at the meet.

After reviewing the event options, the 2000-meter steeplechase was the only competition with timing that meshed with her schedule, so she signed up. Because she had never ran the event before, Coburn got the blessing of a nearby college to train at their facility and went to work.

The result was love at first lap.

And for Coburn, this all came naturally.

After a condensed training schedule, the then 16-year-old runner showed up at the 2007 Great Southwestern Classic and unexpectedly won the 2000-meter steeplechase. But a win wasn't the only thing she scored.

Since she is from a state known for its high altitude, the time went through an elevation-conversion equation, and the result qualified Coburn for that year's Nike Outdoor Nationals. She went on to win fourth place at the event, earning All-American honors and catching the eye of her eventual college and current coach, Mark Wetmore.