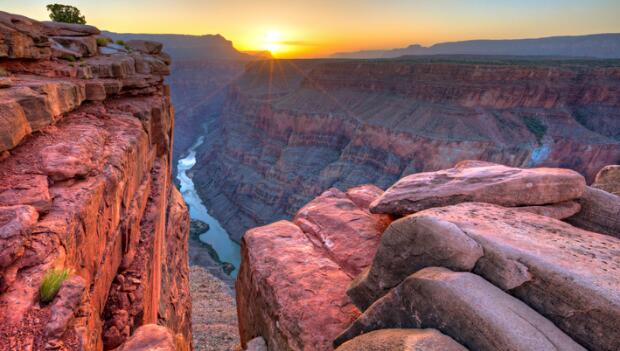 The Grand Canyon National Park has a story to tell.

The tale begins over 80 million years ago with the Colorado Plateau rising dome-like from the Earth's crust. This formation remained relatively unaltered until 6 million years ago, when the Colorado River began carving and forging a path of erosion through the uplift. The limestone, sandstone and shale were the first to succumb to the elements of change, forming cliffs and slopes down the ravine. The granite and schist put up more of a fight. Interwoven materials gave the 277-mile chasm its modern stair-like appearance.

Mesas, buttes and spires formed as the canyon continued to expand, dropping nearly 6,000 feet from the North Rim and widening to a maximum distance of 18 miles. Lines of a forgotten land began to weave across the buried horizon in patterns of unplanned ancient architecture--these were the planet's castles before humans even had the words to describe them.

And as the river continues to erode the depths of the abyss, the story is compounded by additional theatrics: shifting angles of sunlight, waning shadows, light snow, heavy rain, cloud cover, clear skies. Each element plays a part in the ever-changing color of the canyon. Warm hues of orange and yellow morph to blood red; purples become more apparent as the night closes in.

Each year nearly 5 million visitors come to experience the visual adventure. It's easy to become paralyzed upon first sight, refusing to move away from the spectacle. But further exploration only enhances the initial shock. The park can be explored in three main sections: the South Rim, the North Rim, and the Inner Canyon.

The South Rim (about 7,000 feet elevation) is the most frequented section of the park, attracting roughly 90 percent of the visitors. This is where you'll find Grand Canyon Village, harboring many hotels, restaurants and shops, not to mention the main visitor center.

This area is generally crowded spring through fall. To combat the congestion, the park offers free bus shuttles; these are useful when heading west of Grand Canyon Village along the 7-mile Hermit Road (which is closed to private vehicles March through November). Viewpoints along this road include Maricopa Point, Hopi Point, Mohave Point, Prima Point and Hermits Rest.

Heading in the opposite direction (to the east), you can travel along Desert View Drive and see Yaki Point, Moran Point, Lipan Point, Grandview Point and the Desert View Information Center.

The South Rim is open year-round.

The North Rim (about 8,000 feet elevation) has far less to offer in terms of development but not in beauty. This rim only gets about 10 percent of the visitors and is closed during the winter because it receives much more snow than the South Rim (closure is usually October through May, but this is subject to change depending on weather).

Visitors of the North Rim can stop at the visitor center and the Grand Canyon Lodge before they head along Cape Royal Road to access Bright Angel Point Trail (only .25 miles and has one of the park's best overlooks), Point Imperial (the highest viewpoint in the park) and Cape Royal Trail.

It's 235 miles to travel from the North Rim to the South Rim.