How to Get Into Pro Cycling 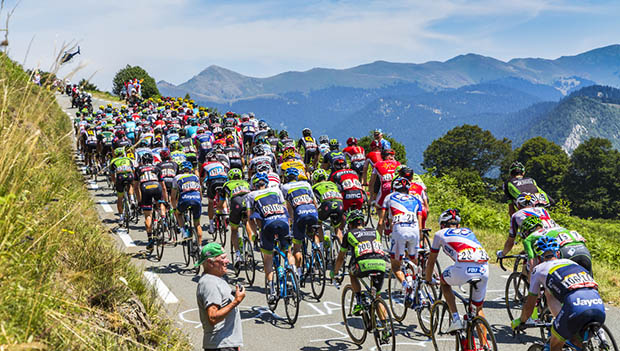 Bike racing is pretty amazing to watch, but understanding what's going on during an hours- or days-long event might not be as straightforward.

Video coverage of bike racing  does not focus solely on riders; spectators are offered views of the terrain and architecture, often from both overhead and ground-level perspectives. You'll get to see some pretty amazing parts of the world. And, you'll get to watch pro cyclists do things on bikes that are almost unbelievable  at race speeds: eating while riding with no hands, bunny-hopping tall curbs, navigating while shoulder-to-shoulder in packs of 200 at eye-watering paces, descending at over 100 kph and racing for hours at a time.

As you get to know the different teams, riders and strengths, you'll realize how much cycling is a team sport cycling.Some riders and teams excel at winning grand tours while other teams are one-day specialists. And, some teams have riders who are one-day specialists while their teammates are general classification contenders. No matter the combination of riders, teammates lift each other up. If a cycling team captain has a flat tire  or a mechanical issue and the team support car cannot get to them, his or her teammates will give up a wheel--or their entire bike--to ensure the success of their leader.

In the United States, watching pro cycling can be a challenge. Comcast broadcasts some races and offers live daily coverage of the Tour de France on the Olympic channel. If you want to watch online, you can purchase access to the NBC Sports Gold  package or check out Fubo  or Flobikes .

The pro cycling  season is nearly 10 months. For top pros, the race calendar picks up in January and concludes in October. You have the majority of every year to follow your favorite teams and riders.

The cycling "spring classics" are contested in March and April in Holland, Belgium, southeastern France and northern Italy. They are long--up to 300 km--single-day events. Some feature roads with cobblestone sections; nearly all experience blustery, raw weather that is often a factor in deciding the winner. These races allow teams and riders that might not have a chance to stand on the podium a grand tour stage and opportunities for wins.

The classics are exciting to watch: Unlike a weeks-long stage race, there's no second-chance days or making up for lost time. Riders who want to win must take action and not wait for opponents to fatigue. Riders often take chances, so there's never a dull moment.

A subset of the spring classics (with one exception) are the Monuments--the five most prestigious one-day races  in cycling, outside of the World Championships. The most well-known of the Monuments is Paris-Roubaix, which features 29 sectors of cobblestones with either mud or powdery-fine dust, both of which make riding extraordinarily challenging. Bike manufacturers design bikes, wheels, tires and all manner of accessories just for this challenging race, known as the Hell of the North.

The Grand Tours--the Giro d' Italia, the Tour de France  and the Vuelta a España--are cycling's most important events, and teams will plan their entire year around performing well in these grueling contests. Each stage of a Grand Tour is a race within a race; a win in a Grand Tour can be a career achievement for some while for other pros, multiple wins write them into history. Grand Tours are exciting to watch--team strategies unfold over days, with calculated changes and surprises throwing teams' plans into disarray. The lead in a Grand Tour may come down to just seconds over weeks and thousands of miles of racing.

The Yellow Jersey  is worn by the general classification leader at the Tour de France. But did you know that there are other jerseys awarded? At the Vuelta a España, the leader wears a Red jersey while at the Giro d'Italia the leader wears the Pink Jersey. All three Grand Tours award the Green Jersey to the points leader--the sprinter with the most wins--while the Polka Dot Jersey is awarded to the King of the Mountains. The rider under age 25 with the lowest aggregate time in a Grand Tour earns the right to wear the White Jersey.

Although there is no Grand Tour in the United States, it does have a very prestigious event each May: the Amgen Tour of California . The same pros who race in the Grand Tours make the trip to California for this eight-day stage race. If you want to go watch in person, all you have to do is show up--there's no ticket or admission required, except at the finish enclosure.

Like the spring classics, the World Championships are a one-day, winner-take-all race, so races heat up quickly and stay dynamic for their duration. The road cycling World Championships features a team time trial, an individual time trial and a road race. The best pros in the world, riding for their respective countries--not their trade teams--vie for the coveted rainbow jersey. Previous years' world champions are designated by rainbow stripes on the cuffs of their jersey sleeves.

As you watch a bike race unfold, watch what happens on climbs: A protected rider will usually not attack right at the beginning of a stage but rather patiently wait until they feel they have the best chance for success. Riders may even pantomime fake fatigue to fool opponents! Teams' domestiques ("helpers") will often take turns attacking on climbs  in hopes of drawing out opposing team captains and forcing them to respond to protect their overall race standing. The strongest teams will have several capable climbers who take turns launching attacks. When the designated team captains sense their rivals are unsuspecting or fatigued from combating domestiques' attacks, they will launch off the front in hopes of riding to a win.

Some of the most exciting races to watch are decided in the last few hundred meters of a day-long race. Overhead camera views of races show riders setting themselves up for position before the final sprint and then trying to accelerate around each other and sometimes colliding at blisteringly fast speeds.

In the closing kilometers of a race, teams are constantly jostling for position while trying to maintain continuity in their ranks: sticking together in a single-file "lead-out train." The fastest sprinter  will be at the end of this train. As riders fatigue, they will pull off the train--each rider will sacrifice their own chance of winning to deliver their designated sprinter to a winning position. Using this tactic, closing speeds may exceed 70 kph and sprinters may be pushing over 1900 watts of effort!

Breakaways usually don't succeed at the pro level: Races are long, and the strength of the peloton is amazingly fast; one--or even a few--riders cannot match the collective speed of the group. It's not uncommon for a break to be caught in the last 5 km of a race. So what makes a breakaway so fun to watch? Hoping it will succeed.

Solo riders may be allowed up to a 10-minute gap before the group gets nervous and ratchets up the pace to reel in anyone off the front. But sometimes the pack underestimates the abilities and determination of those breakaway riders, making for an exciting if somewhat rare solo breakaway win.