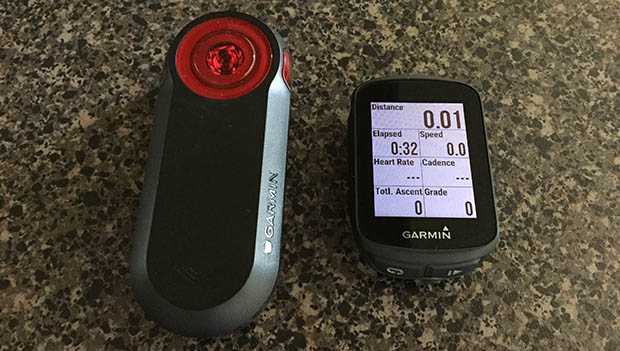 When it comes to performance metrics, we’re in a period where real-time information and data analysis are thrown at us at a mind-boggling rate. While I admit I nerd out on obscure datasets that sometimes yield marginal results, there’s something to be said for a basic unit that provides all the necessities and works time and time again.

Loaded with features and offered at a competitive price point, the Garmin Edge 130 is perfect for the everyday cyclist looking for a no-frills solution to tracking performance.

Right off the bat I was surprised by how small the Edge 130 actually is. At 1.6 inches wide by 2.5 inches long by 0.6 inches thick, it’s smaller and lower in profile than the ultra-popular Edge 520 I’ve grown accustomed to the past couple of years. It’s light too, weighing in at a stunning 33 grams.

The buttons are arranged differently than other Garmin cycling computers, but it’s still just as easy to navigate. The top left turns the unit on and off, the bottom two are for laps and starting and stopping rides, and the left two are for scrolling. We appreciated the use of buttons instead of a touchscreen–not only does it keep the price down, but they’re just easier to use while in the saddle.

The back of the unit includes Garmin’s standard quarter-turn mount and a micro-USB port, making it simple and compatible with other aftermarket mounts and accessories.

Simplicity and ease of use were obviously in the forefront of Garmin’s mind when designing the Edge 130. The unit features a single activity profile that is customizable with up to five different screens, and each screen can include up to eight data fields—a departure from other models, like the Edge 520, where you can set up different activity profiles for different types of cycling.

Although not in color, the 1.8” mono Memory in Pixel display is impressively crisp and clear, even in direct sunlight. Plus, the metrics were easy to read even when viewing eight data fields on a single screen.

The Edge 130 is compatible with ANT+ and Bluetooth Smart sensors, including power meter compatibility. Being more of a device for the everyday cyclist, there is some reduced functionality when compared to Garmin’s more expensive models. For example, it won’t show your left vs. right power balance, but it will show average and three-second average power data—all the average cyclist will generally use, anyway.

I paired my personal Garmin cadence sensor, heart rate strap and speed sensor to the unit while testing. The setup process was quick and intuitive, and the Edge 130 found and paired to the entire range of sensors almost immediately. There’s nothing more frustrating than having to continuously search for and pair sensors before every ride, and the Edge 130 eliminates that frustration.

It was evident this little device packs a serious punch.

The Edge 130 also pairs to your smartphone through the Garmin Connect app, so you will be able to receive text and call notifications during your ride if you wish. Again, I was impressed with how quickly (and consistently) the unit paired to my phone before each ride.

Ready to hunt for your next KOM? Garmin has even included Strava Live Segments in the Edge 130. Once downloaded, you’ll be able to attack your starred segments of choice in real-time—with a countdown, plus distance and time remaining—and see how your effort compares to your followers, your former PR and the KOM.