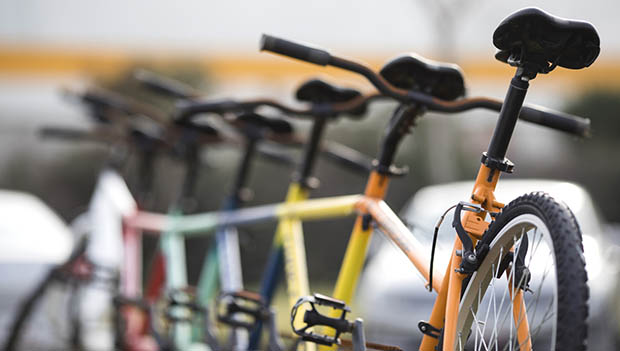 From its influence on the auto industry to record-setting performances, cycling has a rich history that dates back to the early 1800s. With iconic races that include the Tour de France and Paris Roubaix, as well as huge leaps in both performance and technology throughout the years, even the most die-hard cyclist always has something to learn.

We rounded up 10 of our favorite fun facts about cycling, perfect for schooling your riding companions over a post-ride pint.

The Fast and the Furious

In 2018, American cyclist Denise Mueller-Korenek set a new "bicycle speed in slipstream" record of 183.9 mph (296 kph) at the Bonneville Salt Flats. Mueller-Korenek didn't just break the record, she smashed it—the previous longstanding mark (set in 1995) was 167 mph. To put this in perspective, Tour de France cyclists can hit around 62 mph when descending.

You likely know bikes are an ecofriendly alternative to gas-powered transportation, but you probably didn't realize just how ecofriendly they really are. According to ilovebicycling.com, compared to cars, a daily 16-kilometer commute on a bicycle saves a rider close to $15 per day, five kilos of carbon dioxide emissions and they burn around 360 extra calories. Also, bicycles use two percent as much energy as cars per passenger-kilometer and cost less than three percent as much to purchase.

We've all heard the story of the Wright Brothers and their groundbreaking developments in aircraft technology, but did you know Orville and Wilbur owned their own bike repair shop? This same shop was used when they designed and built the infamous 1903 Wright Flyer.

Lasting 21 days and over 3,000 kilometers, the Tour de France is one of the most grueling athletic events in the world. But while the mileage alone is impressive, so too is the diet of these professional cyclists. Each rider consumes between 5,000 to 7,000 calories every day, depending on the length and demands of the stage. Now that's a lot of pasta!

If you thought cars ruled the world, think again. According to Bicycle Market Research Institute, it's estimated that more than a billion bicycles are present in the world with nearly half of them in China. The United States is second on the list with over 100 million bikes, and Japan is third with over 72 million.

Besides showing off chiseled calves and claiming an "aero" advantage, there are more practical reasons why cyclists shave their legs. In the case of road rash, the lack of hair makes cleaning the wounds easier and helps prevent infection. Also, it's easier to massage shaved legs (and less painful) versus hairy ones—and we all know how much cyclists love their massages.

A tandem bicycle is generally a two-seater bike where both riders pedal and the front rider steers. But one tandem aficionado didn't stop there—he created a 67-foot long tandem bicycle that can be pedaled by up to 35 people. Practical? Not really. Awesome? Definitely.

It's no secret, cyclists sweat a ton due to the physical demands of the sport. But what you didn't know is that if you added up the mileage of the Tour de France and monitored your total sweat production throughout the entire event, one cyclist accumulates enough sweat to flush a toilet 39 times. Now imagine the total for the entire peloton. #gross

We're not talking about shifters and derailleurs becoming more affordable as technology progresses—we're talking about bicycle tech used on cars. The world's first air-filled tire was developed for bicycles in the late 1880s and wasn't used by the car industry for almost 10 more years. The development of the two-way valve and the beaded edge made adoption by cars more feasible, despite the belief that cars could never drive on air-filled tires.

It's widely accepted that cycling is a low-impact way to stay in shape and shed unwanted pounds, but what do these numbers really look like? According to the Outdoor Foundation, the average person will lose around 13 pounds in the first year of commuting by bike to work, without making any other changes to their diet or workout routine.

READ THIS NEXT: 23 Fun Facts You Didn't Know About the Tour de France