What Makes A Good Triathlon Runner? 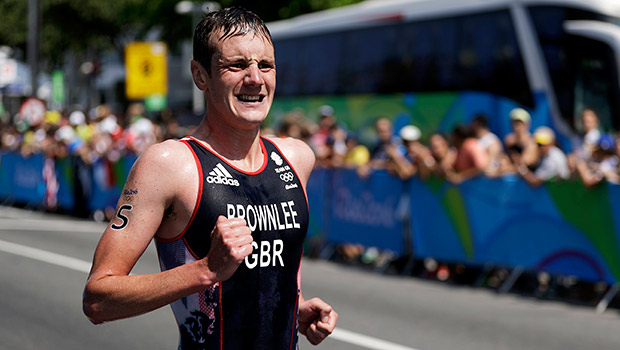 The best runner in the sport of triathlon today is Alistair Brownlee, the reigning Olympic champion from Great Britain. Brownlee proved just how good a runner he is in 2013, when he lined up against a field of elite runners in Heat 2 of the 10,000 meters at the Payton Jordan Invitational at Stanford University. He beat 19 of those 20 runners, finishing less than two seconds off the win with a time of 28:32.48.

As impressive as this time is, it is almost a minute slower than the winning time in Heat 1 of the 10,000 meters (which took place immediately before Brownlee's race) and is more than 100 seconds slower than Galen Rupp’s record. Alistair Brownlee routinely records the fastest run split in the triathlons he competes in. How much faster would someone like Rupp go in the third leg of a triathlon?

Being a strong pure runner is no guarantee of being equally strong as a triathlon runner.

Actually, a record-breaking runner like Rupp would probably run slower than a mere national-class runner like Brownlee in a triathlon. This speculation is based on the evidence of how the greatest pure runners have fared in the sport of triathlon in the past.

Consider the example of Cristian Bustos of Chile, a top IRONMAN triathlete in the 1980s and '90s. Bustos was perhaps the strongest pure runner in that era of triathlon, boasting a marathon time of 2:16. By contrast, six-time IRONMAN world champion Dave Scott ran several marathons and could muster nothing faster than 2:33. But Scott's best time in Hawaii was a full eight minutes faster than Bustos' (2:41:02 to 2:48:05).

As comparisons like this one show, running on tired legs in a triathlon is a different skill than running on fresh legs in a track or road race. Being a strong pure runner is therefore no guarantee of being equally strong as a triathlon runner.

Exercise scientists have demonstrated that some triathletes are better able than others to preserve their normal running mechanics and economy after cycling. For example, in a 2010 study researchers at the University of Queensland, Australia, compared muscle activation, stride mechanics and running economy in moderately trained triathletes during a pair of 15-minute runs, one following a hard 45-minute bike ride and the other in a fresh state.

Seven of the 15 subjects exhibited significant changes to their normal stride mechanics during the post-ride run. These changes negatively affected running economy. The most harmful change was an increase in the angle of the ankle at footstrike, which is usually associated with overstriding.