Nordic Skiing 101 For the Triathlete or Cyclist 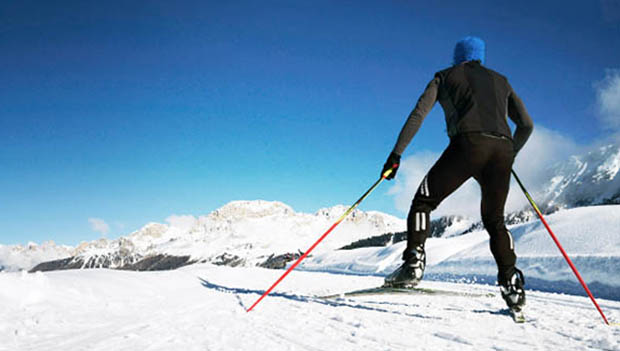 Competitive Nordic skiers are known as the fittest people on earth. This designation comes from scientific testing that demonstrates Nordic skiers have the highest VO2 max, which is the amount of oxygen the human body can take in and utilize per minute. Outside of genetics, the sport itself develops VO2 max through the requirements of movement and engagement of the whole body. Arms, legs and core are all essential, and when combined with proper technique, Nordic skiing can generate some incredible speed and performance gains.

The off-season triathlete or cyclist can benefit from incorporating Nordic skiing into their winter training routine. Not only can it be a great break from the monotony of indoor training, but it also offers enormous cardiovascular and muscular benefits, as well as increased coordination and the chance to fire up some different muscle fibers.

There are two basic types of Nordic skiing happening on groomed trails. The first has been around the longest and is referred to as diagonal or classical skiing. The skier keeps the feet parallel, and uses a “kick and glide” technique. The ski for this type of skiing has a kick zone or pocket that extends from the toe out behind the foot, the size depending on the skier and the flex of the ski. The base in that area is manufactured with a rough area of scales that can grip the snow, or is designated for kick wax applied by the athlete in accordance with the snow conditions on a given day. When the athlete puts weight on the ski, the pocket is pushed flat, the grippy surface grabs the snow and the skier is propelled forward. Poles for classic skiing are generally to the middle of the shoulder and the boot has more flex to allow for the bend at the toe when kicking.

The second type, and perhaps the more popular for the cross training triathlete or cyclist, is skating. Skating became an official Nordic discipline in 1987 after professional athletes were already starting to incorporate it into their races because of the speed increase. Skate skis tend to be shorter with less camber or flex. The entire ski is waxed for speed as the motion of the foot is lateral and assists in generating forward propulsion. Much of the power for skating comes from the core and the upper body. Therefore, the poles are taller and the boot is stiffer and taller, so the effect is more like a speed skate with the ski representing the blade.

The USSA Level 100 manual designates nine areas that are consistent between disciplines and can be considered when learning to ski.