The most popular backpacking area is Desolation Wilderness, a 63,690-acre granite slab on the edge of the tree line in Eldorado National Forest. Nearby, the 19,048-acre Granite Chief Wilderness, a relatively unknown aside from the popular Five Lakes day hike, has deep canyons, fields of bright yellow mule's ears and the historic cabins at Whiskey Creek.

The following backpacking trips are an introduction to some of the best trails around the lake. The first three can be done in a weekend while the Tahoe Rim Trail, which circles Lake Tahoe, represents a major undertaking. A campfire permit is required, which also covers the use of backcountry stoves, and some areas require additional permits. 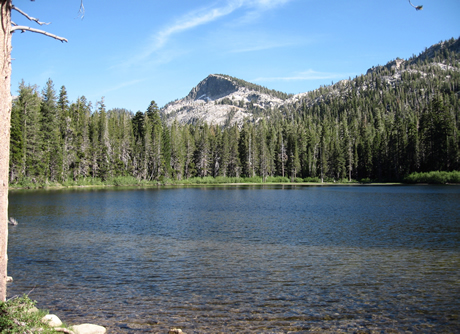 Genevieve Lake, just one of many lakes in Desolation Wilderness, photo by Inga Askamit

Most routes are filled with expansive views of Lake Tahoe, the 9,985-foot Pyramid Peak and a multitude of slightly smaller peaks in the Crystal Range.

The must-know: Due to its popularity, permits are necessary during the summer season and are distributed by quota in different zones.

The route: This 18-mile weekend loop starts in the Genevieve zone, not far from Sugar Pine Point State Park. On your first night, Stony Ridge Lake offers several spacious, forested primitive camping spots with views of a rocky ridge lit up by the setting sun.

A collection of three small lakes known as Velma Lakes makes a good stopping point on the second day. Don't forget to take a restorative swim before you head out.