The Latest in Swim Technology 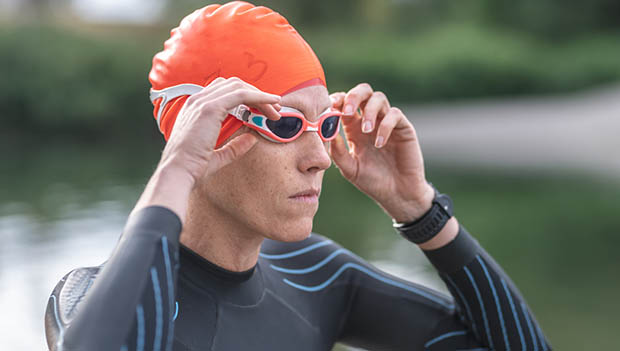 Not unlike most sports, triathlon is all about pushing the boundaries of both human performance and technology. Triathlon bikes have morphed into featherlight pieces of molded carbon that look like they're straight out of a science fiction film, and running shoes are more responsive and feature-packed than ever before. While the cycling and running components of this relatively young sport have seen leaps and bounds when it comes to technological, one could argue the swim leg has been comparatively neglected over the past few decades.

Luckily, swimming has recently seen an increase in brands focusing on bringing new ideas into the pool. As tech-obsessed as most triathletes are, these advancements have been embraced wholeheartedly--and the swim industry has taken note.

From goggles with minimal drag resistance to smart paddles, these seven products are pushing the boundaries in the swim technology arena.

These aren't just Nike's most innovative swim goggles to date--they also have the least amount of drag compared to their leading competitors' performance goggles. Nike Swim conducted a computational fluid dynamics (CFD) analysis to study the drag produced by the Nike Vapor against leading competitors from the freestyle, breaststroke and butterfly swim strokes, and the Vapor came out on top. Not only that: The oversized lenses and soft gaskets increase both the range of view and comfort.

Similar to the Recon Jet smart glasses that feature a heads-up display for cyclists, a similar technology is now available in the pool. FORM goggles feature a smart display in the right lens that shows important metrics for swimmers, including split times, stroke rate/count, pace per 100, distance, calories and heart rate. They also detect turns and rest, and are built with quality materials to last longer than traditional disposable goggles.

Despite also being valuable for the other legs of a triathlon, this piece of tech is too good to leave off our swimming-exclusive list. The Vantage V Titan is Polar's latest multisport and triathlon smartwatch, and it's loaded with features that will benefit swimmers and triathletes alike. Swim-wise, the device automatically detects metrics like heart rate, swimming style, distance, pace strokes and rest times--both in the pool and in open water. Better yet, it also offers invaluable features like Sleep Plus Stages and Nightly Recharge to monitor quality of sleep and recovery, as well as Training Load Pro to quantify the strain and stress of a training session.

If you've never heard of ROKA, here's your introduction. It's an Austin-based multisport brand that has taken over the triathlon scene with its breakthrough wetsuit, sunglass and goggle technology. Its flagship Maverick line of wetsuits--most specifically the Maverick X--boasts the title of the world's fastest and most innovative wetsuit. With patented Arms-Up technology with impressive shoulder flexibility and the RSX Centerline Buoyancy that makes for a snappy side-to-side rotation, it's no wonder why eight-time world champion Javier Gomez and IRONMAN World Championship swim record holder Lucy Charles have chosen ROKA as their wetsuit sponsor.

Easily the most expensive product on this list, it's also one of the most unique and intriguing. NOME is essentially an underwater metronome that uses preset workouts and visual cues to help you pace in the pool. The LED strip runs the entire length of the pool and takes the guesswork out of pacing, counts your laps, helps perform accurate threshold testing and more.

While Nike can claim the "least amount of drag" title, ROKA has taken the approach of redesigning goggles from a more functional level. Most swim legs take place in open water without a black line to follow, which means triathletes naturally look forward more often when sighting. The ROKA R1 goggle features a lens (its RAPIDSIGHT technology) that's angled back 11 degrees to promote a wider forward field of view. Pair this with its SPCTRM lenses and you'll be seeing buoys more clearly and further away than ever before.

Even with video footage, refining your swim form and technique can be tricky. To help make this a bit more quantifiable, the team at Trainescense has created the SmartPaddle--a wearable powermeter that records the applied force and the trajectory, speed and orientation of the hand during a stroke. If that wasn't enough, it also works as a stopwatch, automatically records strokes and laps and pairs to its app via Bluetooth for future analysis.

READ THIS NEXT: 25 Essential Items for Your Triathlon Race Bag