Run Like a Mother on Mother's Day and All Year Long 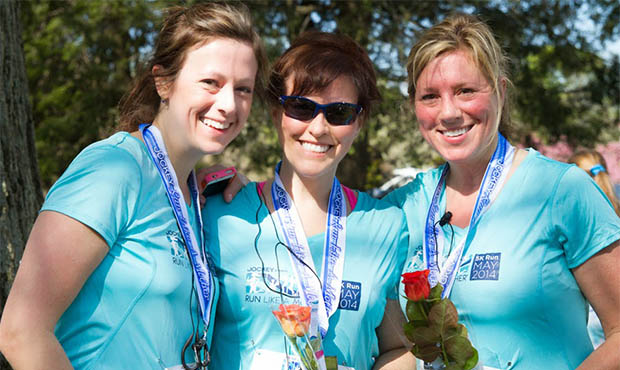 It all started with a casual run on Mother's Day in 2007.

To celebrate their special day, a small group of moms in Ridgefield, Connecticut got together for a jog and coffee date, not knowing what that simple gathering would eventually become.

The next year, one of those moms, Megan Searfoss, had a lightbulb moment.

"What if I put on a race that we can invite everybody to be part of?" the 51-year-old mom of three asked the others.

After organizing a 5K on Mother's Day the following year, Searfoss and her friends spread the word about the race in Ridgefield. Within days, 500 women had signed up for the event.

Since then, The Run Like a Mother 5K—an ear-catching name Searfoss thought of while lying in bed one night—has grown into a national race series and an annual celebration of women. This year, races are set to take place in six cities on Mother's Day weekend: St. Paul, Minnesota; Frisco, Texas; Ridgefield, Connecticut; Milwaukee, Wisconsin; Phoenix, Arizona and Raleigh, North Carolina.

"Mothers choosing to get up and run first thing on Mother's Day sets an example for their families that health and wellness is important to them."

The race in Ridgefield draws up to 2,000 participants each year.

"We do attract fast women," says Searfoss, who also co-owns Ridgefield Running Company. "It's more about the fact that women are doing this for the first time and enjoying what running can do for them."

Like Thanksgiving Day races, Run Like a Mother events have become an annual tradition for many families, says Searfoss.

"It's the one day of the year where the kids line the streets and cheer for their moms," she says. "Moms spend so much time on the sidelines cheering the kids on."

Afterwards, families have picnics and spend quality time together.

About 500 women are expected to toe the line at the Run Like a Mother 5K in Raleigh on May 8, according to race director Renee Harvey. The events have become such a success because participants love the message: Women need to make their own well-being a priority, even (and especially) when they have families.

"Mothers choosing to get up and run first thing on Mother's Day sets an example for their families that health and wellness is important to them," Harvey says. "Rather than sitting in bed and being served homemade toast and Cheerios, they get up and start the day with something that is good for them."

But women who don't have children shouldn't feel like they can't participate, says Searfoss. "There is no shaming if you're not a mom—it's a women's race."

Some women run in honor or in memory of their mother or grandmother. Others are completing a 5K for the first time or celebrating that they have survived an illness.

Whatever the reason, all women receive a flower and medal at the finish line.