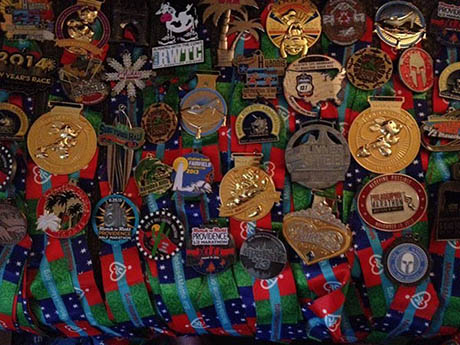 Diana Cohen wasn't always a runner. In fact, there was a time when she despised the mere thought of running. Growing up in the northeast, she gravitated toward hockey during cold winters and studied martial arts year-round. When it came to exercise, running didn't have a spot on her playlist.

It wasn't until 2004, when Cohen was in graduate school, that she entertained the idea of lacing up her sneakers for a run. Attempting to connect with her roommate, she reluctantly joined a few runs, eventually signing up for a half marathon at the urging of her new friend. Cohen trained for the event, unexpectedly falling in love with the sport along the way.

"I was hooked when I realized that there's an infinite number of combinations to try. Whether it's distance, location or type of workout, each run has the possibility of being unique," Cohen says.

And so a runner was born. After finishing that first race, she continued running, eventually adding multiple marathon and eight IRONMAN triathlon finishes to her racing resume.

Though the thrill of training and allure of finish lines keeps the now 34-year-old associate professor coming back for more, she wanted to extend her experiences beyond the personal triumph they consistently deliver.

A friend invited Cohen to join on a race medal donation visit a couple of years ago at a local hospital. She had no idea how the excursion--organized by Medals4Mettle--would change her, but doesn't want to imagine a life without it now.

Visiting a hospital where patients were fighting battles for their health, the two women distributed donated race medals as tokens honoring their fight. Telling stories of the race-day journey behind each medal, Cohen and her friend drew parallels between the courage it takes to continue a race and the strength required to fight for a healthy life.

Hooked on the experience after only one day, Cohen returned home to volunteer as the Medals4Mettle coordinator of the Hartford, Conn. chapter. She collects medals from athletes all over, then visits a nearby children's medical center. Going room-to-room, Cohen gives sick children the donated medals while connecting with them to cheer on their fight. At the end of each visit, she leaves with a full heart and a renewed appreciation for the body that allows her to pursue her dreams. While some athletes might find parting with their medals difficult at first glance, Cohen believes the experiences matter more than the bling.

"Why not share the experience and brighten someone else's day by giving away the medal?" she says. "Ultimately, you have the ability to spread some joy to someone fighting a greater battle, which ends up bringing your own journey to the next level." To find out more about the Medals4Mettle program or how you can donate your own race bling, visit medals4mettle.org.

Find a race for a cause.