10 Outdoor Books for the Off-Season 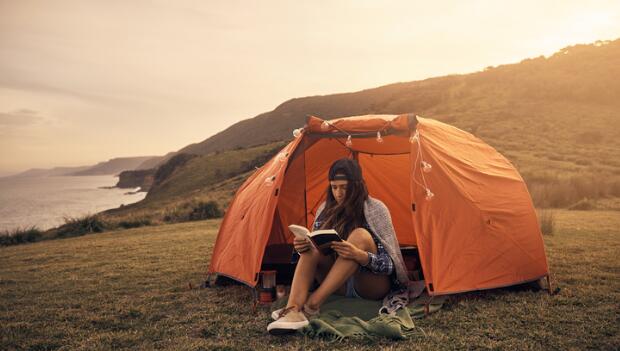 Camping sets the stage for a good story. You've removed yourself from the daily grind, and are free from structure and time. It's as if you're already sitting in the lounge chair with the fire stoked, waiting for someone to put a good book in your hand.

Don't settle for any old book the next time you head out into the wilderness. If you don't camp in the off-season, read these 10 must-read books; they'll make you feel like you're exploring the wilderness yourself.

Follow Chris McCandless into the Alaskan wilderness on his deadly quest to disconnect from society and live off the land. In this true story, Krakauer retraces McCandless' final moves and explores what may have motivated such a bright, young man to make such drastic decisions.

Between a Rock and a Hard Place

This jaw-dropping story starts with a day hike and turns into a gripping tale of survival. While hiking through a Utah slot canyon, Ralston gets his arm pinned between a falling rock and the canyon wall. After six days of dehydration, hunger and hallucinations, he takes radical measures to free himself.

Last Child in the Woods: Saving Our Children from Nature-Deficit Disorder

It's no secret that kids spend less time outside. Louv not only outlines the factors that have led to a decreased exposure to the natural world, he also links this nature deficit to an increase in conditions such as attention-deficit hyperactivity disorder, stress, depression, anxiety disorders and childhood obesity. On the flip side, he emphasizes the importance of reacquainting ourselves with nature as a way to "lessen the frequency and severity of emotional and mental ailments."

If you're at all interested in the impact of nature on the human psyche, this outdoor book is a must-read.

Quite possibly the most incredible survival story ever told; Endurance follows adventurer Ernest Shackleton and his crew of 27 men as they embark on a voyage to the South Pole that turns desperate when their ship gets stuck in the ice floes of the Antarctic seas. Through interviews, diaries and personal accounts, Lansing pieces together what it took for this heroic group of men to survive for more than a year in the most extreme climate on earth.

Once you start reading--adventurer or not--you won't want to put this book down.

If a desert wind has ever swept through you and captured a little piece of your soul, this book is a must-read. Abbey, who spent several seasons in Moab, Utah, peels back the dry landscape and takes you inside the heart of the American Southwest.