How Much Does a Tour de France Bike Cost? 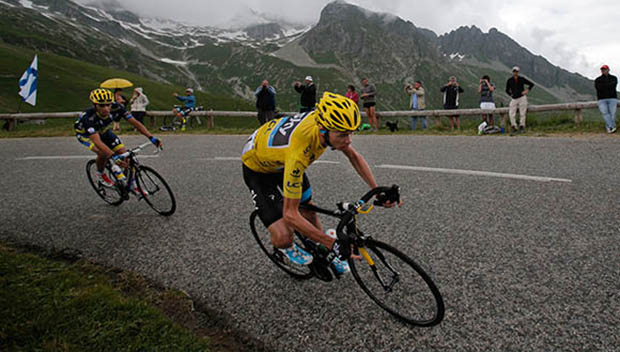 Cyclists are always looking for the latest and greatest when it comes to technology and performance. This might mean fancy recovery products promising an extra edge, or wearable tech to monitor just about every metric you can imagine.

And when we think of the best of the best, naturally the Tour de France comes to mind. Riders have every imaginable resource at their fingertips, and many brands will unveil some of their new prototypes that haven't even hit the market yet.

This 21-day race is essentially a rolling smorgasbord for cyclists who nerd out on electronic groupsets, carbon wheels and disc brakes—drool included.

But how much would it cost to actually buy a bike the riders are using in the Tour? Just as the same roads and routes are available to amateur cyclists, eventually this tech will be released and found at your local bike shop (likely for special order).

While you may be able to buy Peter Sagan's or Chris Froome's bike, it doesn't mean you're going to sprint or climb like either of them. But at the very least, you'll look about as pro as possible the next time you roll up to your Sunday shop ride. Plus, not only will your new bike save you weight, but your wallet will be considerably lighter, too. #grams

Below we've gathered three top-shelf bikes actually ridden in the Tour de France that are attainable for the average Joe.

Cannondale has been racking up accolades for decades, and its newest high-performance offering, the SystemSix, is no exception. Crowned the 2019 Race Bike of the Year by BikeRadar, and the fastest bike tested by Tour Magazine, it's no wonder Cannondale has been a Tour de France mainstay. This year, it's once again the bike sponsor for Slipstream Sports (with a new title sponsor EF Education First), and this SystemSix has been praised by the likes of Rigobero Uran, Taylor Phinney and Lachlan Morton.

Of course, each rider customizes his bike depending on the conditions and his own preferences, but let's take a look at the components and features included in the consumer model that add up to the whopping $11,500 price tag.

Learn more about the Cannondale SystemSix

Specialized might arguably be the most recognizable name in cycling, period. Not only does it dominate the U.S. market, but it's available in most bike shops and offers a wide range of models for every type of cyclist. It's just about everywhere you look in the Tour de France, too, and this American brand cleaned house with seven wins in the 2018 edition of the race (the next closest was Bianchi with three wins). Specialized sponsors not one but two Tour de France teams, and last year Fernando Gaviria and Julian Alaphilippe (Quick-Step Floors) combined for four wins, and Peter Sagan (Bora-Hansgrohe) came away with three.

The Specialized S-Works Venge was ridden by all three at different points during the 21-stage race, and it's no surprise. The bike is super light, stiff and aero while being surprisingly compliant—perfect for maximizing efficiency on back-to-back long days in the saddle.

Learn more about the Specialized Venge

While the previous two bikes were the aero offerings from two major American brands, we mixed it up a bit with this last inclusion. Canyon, a relative newcomer to the cycling scene, has disrupted the cycling scene in a big way. This German brand sells its bikes direct-to-consumer, which means it bypasses the middleman (a.k.a. bike shops) and sells its bikes online to ship directly to the customer. This allows it to sell at a considerably cheaper price point (yes, even at $9,000).

Like Specialized, Canyon sponsors two WorldTour teams in the Tour de France—Katusha-Alpecin and Movistar. It offers an aero road bike, too, but here we've included its flagship do-it-all model—appropriately named the "Ultimate." This model has several victories at the Tour de France, but it now dons the rainbow stripes after Movistar's Alejandro Valverde won the Road World Championship in 2018.

Learn more about the Canyon Ultimate

READ THIS NEXT: The 7 Coolest Bikes in Tour de France History