What Is a Folding Bike and How Does It Work? 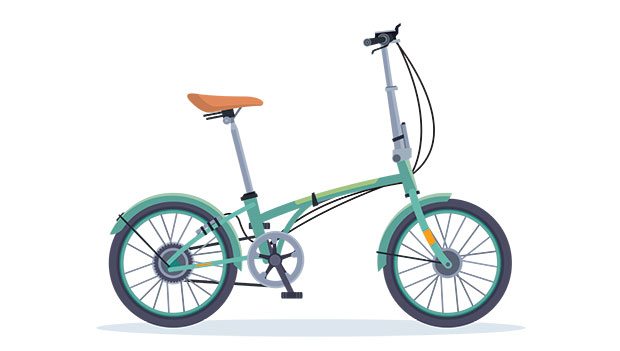 We know roadies and mountain bikers sometimes commute to work and run errands by bike, but how many of us ride a folding bike?

This category of bike is one of those niches in the cycling community that doesn’t get nearly the attention it deserves. Folding bikes are convenient, reliable, portable and just plain fun to ride.

But what actually is a folding bike? We’re breaking the “folding bikes” category down by first outlining how one works, why you should try it and some of the most popular folding bike brands.

What Is a Folding Bicycle?

You guessed it: A folding bike is essentially as described—a bike that folds up. They’re designed to be a space-saving solution for commuters and urban riders where square footage is a limiting factor.

But how it folds up to such a compact form is really what’s most impressive. While all folding bikes employ a variation on this general process, let’s take a closer look at how Brompton designed its bikes (more on Brompton below).

The back wheel, including the rear triangle and derailleur, folds up under the main frame of the bike. The “top tube” portion of the frame pivots at the hinge, and the front wheel swings around to sandwich the rear wheel opposite the derailleur (this helps protect the rider from all the moving parts when being carried).

Next, the handlebars drop down alongside the back wheel, and the saddle is dropped down and locked in place to be used as a handle. The whole process takes less than 30 seconds to both set up and tear down.

Folding bikes come in all shapes and sizes, including both single speed and geared options, and some even have simple suspension systems. They’re quirky, and this “fun factor” has been embraced by both folding bike enthusiasts and manufacturers—you can find a wide range of color schemes and accessories to make your folding bike as unique as you’d like.

Why Should You Try One?

We’ve answered this question more in-depth here, but there are a few reasons why we think everyone should try a folding bike.

First, and most importantly, folding bikes are a convenient solution for areas (especially city dwellers or office workers) where space is limited. They require significantly less real estate compared to a standard road or mountain bike, they’re easy to bring along on public transportation and since they can be brought indoors, you don’t have to leave them locked up outside and run the risk of your bike being stolen.

Second, they’re surprisingly quick and nimble. Folding bikes have smaller wheels to make them more compact, and this makes the riding physics totally different. They don’t have the same top-end speed as a full-size bike, but they’re easier to accelerate (great for dealing with stop signs and red lights). Plus, they have a nimbler feeling that’s appreciated when dodging foot traffic, road hazards and more.

Third, folding bikes are super reliable. They’re designed to be daily commuters, which means that even though they’re compact, they’re built to be durable and handle the wear and tear of high-mileage city riding. High-end folding bikes can be a bit pricier than you might expect, but take a critical look at your daily transportation costs—after the bus fares, gas mileage, insurance, maintenance and more, a folding bike has an attractive cost-per-mile that makes sense for a lot of commuters.

There are several different brands that manufacture folding bikes, but we gathered three that are especially popular.

Brompton the iconic folding bike brand, and with over 45,000 bikes produced each year, it’s the UK’s largest bike manufacturer. It has several different models available, from the classic design for commuters to a road bike-style that’s designed to be lightweight for fitness miles. And if you’re a fan of racing, don’t sleep on the Brompton World Championship where participants unfold their bikes and race around a circuit in London. Learn more about Brompton here.

Citizen Bike is a folding bike manufacturer that designs bikes that are a bit more affordable without sacrificing any panache. We love the look of the Barcelona, one of its vintage-inspired models that doesn’t have a top tube. It even offers electric folding bikes that have a max speed of 20 mph. Click here to learn more about Citizen.

Lastly, Tern is a brand that offers a wide range of folding bikes–from electric bikes and classic folding bikes to folding bikes with extra rack space designed to transport cargo (and kids). Some of its folding bikes even have standard sized wheels for increased efficiency for traveling long distances. We’ve had the opportunity to test one of its bikes a few years ago and found it to be a capable option for both touring cyclists and commuters. Learn more about Tern here.

READ THIS NEXT: 13 Tips for Your First Bike Commute