The Peddler: Falling is a Rite of Passage 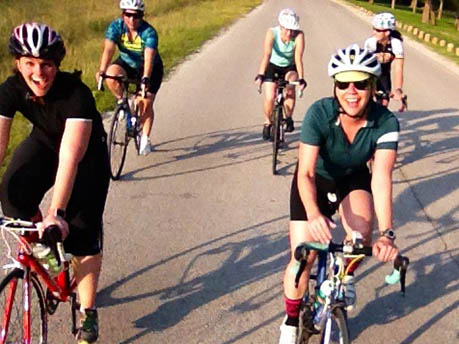 What's more humbling than a fall?

Falling in front of people, of course.

But what's worse than that?

Maybe it's doing all of that on a bicycle, where your embarrassment usually comes with a healthy serving of pain.

I was recently on my weekly ride with the women who are gearing up for Rapha's Women's 100 event July 26.

We were making our way around White Rock Lake in Dallas, and we passed over a suspension bridge that had quite a few cyclists and pedestrians on it—I think there was someone on rollerblades, too. I can't be sure because as I tried to get to the far right side to make room, I swerved into the rusty side of a bridge.

As my arm scraped the orange metal—earning a minor flesh wound—the bike kept moving underneath me. I was oblivious to the intense bruising my legs were sustaining, as I worried people behind me were either going to run into me and hurt themselves or jump off their bikes to come laugh at me.

Neither happened, as I ride with sympathetic women who apparently have quick reflexes. The woman who leads these weekly rides fixed the back brake on my bike, which fell out of whack in the debacle.

Apparently, I had this coming. That's what cyclists tell me, anyway: you fall. (I wasn't even clipped in, so I'm still somewhat embarrassed.)

More: Read the first article in the Peddler series

After this ride, I followed one of these women on Instagram to find she had a recent photo of a bruise: "third accident (second bike) since I moved back to Dallas."

I started to think, "Why do people do this?" I mean, really. There's a lot of gear and it seems it's all expensive; that saddle doesn't ever seem like it will become comfortable; your workout is dependent on the weather; a sharp turn is somewhat terrifying; and dark, large bruises come with this package.

Of course, after the fall, I jumped back on the bike. (Well, jump is probably an exaggeration. I was already sore, after all.) My arm felt numb as we started riding, but I played it cool, acting like the wind hitting me was helping the blood on my arm dry.

Just as I started thinking about how I let someone talk me into signing up for this, we started hitting a faster speed on a wide bend beside the lake. It's at this spot you can see a perfect view of the Dallas skyline—and we hit it just right, as the sun was setting, growing bigger and more orange as it touched the horizon. That's when I remembered that this is pretty darn fun.

That was my longest ride yet, finishing around 22 miles and averaging near 15 miles per hour. Considering my first ride was 11 miles at an average of 13 miles an hour two weeks ago, I'm pretty happy with this.

More: Read the second article in the Peddler series

The 62 miles that I'll need to ride for the Women's 100 still feels like a long way off. And my rides so far have been considerably flat. I'm sure if I were to go on a hilly ride, I'd be in some trouble (or maybe just some pain).

Seven weeks to go until the 100KM event.

Read more of The Peddler series:

The Benefits of Cycling for Women