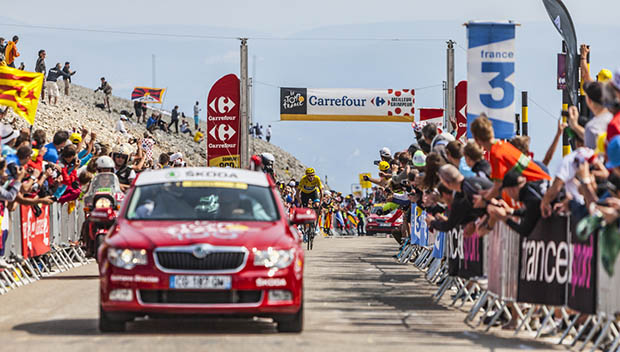 Like many industries, there's no doubt the sports world is reeling from the global COVID-19 pandemic.

The virus has affected all leagues differently due to the inherent requirements of each sport—for example, the NBA has safely returned to playoff action in an isolated bubble while college football conferences (which require more staff and players) have cancelled their seasons entirely. Golf, F1 and cycling have returned for "play" only, meaning fans aren't present while the athletes are competing (although this has been met with mixed success in cycling). Of course, it's not exactly the same, but for sports-starved audiences around the world, this is a welcomed compromise.

Originally scheduled to start in late June, the 2020 edition of the Tour de France was postponed to late August (more on this below), and the organizing body implemented strict health protocols to protect team staff, riders and the communities they pass through. As of the time of publishing, the Tour is still a go, but check back for updates as we get closer to the start of Stage 1.

Below we break down how to watch the Tour de France (for our American audience), what notable stages to be aware of and where we're expecting to see some fireworks and drama during the 21 days of racing.

What are you most looking forward to about this year's Tour de France? Leave us a comment, below!

Originally scheduled for June 27, this year's Tour de France will start on Saturday, August 29 in Nice and wrap up in Paris on the Champs-Elysees on Sunday, September 20. For our American audience, there are a couple ways to see all the action.

If you have cable TV, NBC Sports will be broadcasting each stage of the Tour starting around 7 a.m. ET. The coverage generally starts around mid-stage, with an early stage recap within the first few minutes to catch up on the start and any breakaways or crashes.

Similarly, you can also purchase the Cycling Pass on NBC Sports Gold for about $55 for an entire year of coverage (whch also includes other races like the Vuelta, Paris Roubaix and other classics). You'll be able to log in to the NBC Sports app through any of your streaming devices and watch commercial-free coverage.

Lastly, FuboTV has a subscription streaming service that covers many of the major cycling races, including the Tour de France. The family plan is $65 a month (not $55 a year like Cycling Pass), but it includes NBC Sports and other channels with live sports and TV, too. If you want access to the cycling-only channel, it's an additional $12 a month.

Despite restrictions due to the pandemic, this year's edition is set in the usual 21-stage format with two rest days—the first on Monday, September 7 and the second on Monday September 14. There are tentatively nine flat stages, eight mountain stages, three hilly stages and one individual time trial, but we're expecting these numbers to change as virus numbers fluctuate in different regions. Here are a few notable stages to keep an eye out for:

Stage 2 (186 km): There's no warm-up this year—the route starts off with a bang by featuring a mountain stage (including the Col de la Colmiane and the Col de Turini) on just the second day. Stage 4 also includes a summit finish—one of the rare early summit finishes in Tour history.

Stage 12 (218 km): This is the longest stage of the race. It's hilly and GC contenders are facing a big day of climbing in Stage 13 (finish atop the Puy Mary), so Stage 12 might be one where a breakaway sticks.

Stage 20 (36 km): Time trial stages have long been an important factor in who goes home with the yellow jersey. This year's individual time trial is especially difficult with an uphill (average gradient of a whopping 8.3 percent) route up La Planche des Belles Filles.

Mikel Landa, formerly the super-domestique of Team Sky and Movistar, is now the leader of Bahrain-McLaren, and has a chance to emerge from playing second fiddle to cementing his name as a top talent in the peloton.

The ultimate showman, Julian Alaphilippe of Deceuninck-Quick Step will yet again be mixing things up as he tries to outdo himself from his impressive 2 week stint in the yellow jersey last year. We're not sure if he's targeting the World Championships or the Tour as his "A" race, but he'll no doubt be an ever-present threat through France.

He's won both the Vuelta and the Giro, but will 2020 be the year Nairo Quintana finally finishes in yellow? He's on a new team (Arkea-Samsic), and as the sole leader, he'll have more support as he dances through this mountainous course.

This year it's also not just about who's there, but who's not. Due to a poor showing in the Criterium du Dauphine, perennial powerhouse Team INEOS has elected to go with a solo leader—last year's yellow jersey winner in Egan Bernal (keep tabs on him)—while omitting previous winners Chris Froom and Geraint Thomas. Also, 30-time Tour de France stage winner Mark Cavendish will not be competing, citing poor form.

As far as Americans go, pay attention to Sepp Kuss of Team Jumbo-Visma. He's fresh off a breakthrough showing at the Criterium du Dauphine where he finished 10th overall and stole a mountaintop victory on Stage 5. He'll be riding in support of Primoz Roglic—one of the favorites for the yellow jersey—but he might be given permission to go stage hunting if the opportunity arises.

READ THIS NEXT: 23 Fun Facts You Didn't Know About the Tour de France