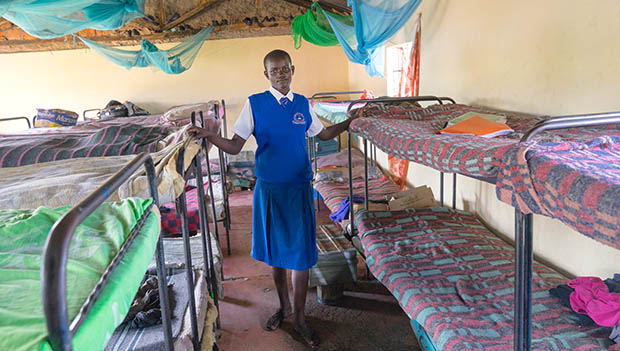 ACTIVE.com is celebrating the year of the bike by supporting World Bicycle Relief. Join the celebration by donating today.

For many at Our Lady Queen of Peace Secondary School in Western Kenya, making ends meet is a daily struggle. Students quietly endure, suffering silently and working patiently, hoping that one day their education will transform their lives and the lives of their families. Phoebe and Eunice are two young girls who want to overcome their circumstances and rewrite their destinies. These are “special girls who have a story worth sharing,” says Louise, their guidance counselor.

Phoebe is seventeen years old, in Form Two at Our Lady Queen of Peace. She is the eldest of five siblings. Phoebe’s father was killed in 1999 during tribal clashes over land between two neighboring communities. Without her husband, Phoebe’s mother struggled to provide Phoebe’s school tuition fees. Cutting and selling sugarcane is her only source of income. Phoebe’s mother knew early on, however, that her daughter was gifted. At times, she would be forced to choose between spending shillings on food or school fees. “When I grow up I want to be a teacher. I want to specialize in chemistry and biology,” Phoebe says.

Phoebe and Eunice have warm smiles. Behind those smiles, however, is a layer of sadness. A visible fear, due to the poverty they’ve endured.

Eunice is tall, elegant, and shy. She’s 16 years old and lives at Golf Course Road Orphanage. Growing up, Eunice did not have the comfort of parental love, nor the security of consistent shelter or food. The orphanage cares for 30 orphaned girls, yet bunking capacity is limited to just 24. This means that some girls double up, two to a bed. Many beds do not have mattresses. The orphanage survives on the goodwill of parishioners and volunteer widows who do the cooking - when there is food to cook.

Initially, Phoebe and Eunice have warm smiles. They share visions for their futures. Behind those smiles, however, is a layer of sadness. A visible fear, due to the poverty they’ve endured.